In the castle, at the brickyard or in the barn: cultural activities can be found at many special places in Oberhavel county and there is definitely something for everyone. The range is wide: Brandenburg-Prussian history, local museums or memorials and modern art exhibitions just to name a few.

Castle and Castle Museum Oranienburg.
The Oranienburg castle is the oldest baroque palace in the Mark Brandenburg. Set on the banks of the river the castle was built in the style of the Dutch baroque during the reign of the elector Friedrich Wilhelm (1620-1688) and his wife Louise Henriette of Orange (1627-1667). In 1652 it was given the name "Oranienburg" which was later also transferred to the town (formerly Bötzow). Since this time the castle has been used in various ways. After 1990 the municipality of Oranienburg moved into the castle and since its comprehensive reconstruction (1996-1999) the castle museum Oranienburg as well as the Oberhavel County Museum can be found here.

In the castle museum the foundation "Preussische Schlösser und Gärten" (Prussian castles and gardens) shows famous artworks from the 17th century, a unique silver chamber as well as the magnificent china chamber.

Find out more about the castle and the castle museum Oranienburg by clicking here.

Receiving guests from all over the world, having a closed meeting remote from the capital in order to discuss government policy in a personal athmosphere - Castle Meseberg, guesthouse of the German government, offers perfect conditions to do so and lies only 60 kilometres north of Berlin in Oberhavel county.

The German government has been using the castle in the little village of Meseberg (a district of Gransee) with 150 inhabitants and situated on the idyllic lake Huwenow as guesthouse since 2007. On the ground floor there are twelve representation rooms of different sizes, for example the library, the fireplace room and the famous Prince-Heinrich-room. A garden pavillon in the baroque park invites guests to stay, "Maison de Plaisir" (House of pleasure).
The construction of the present castle began in 1736 on behalf of Count Hermann von Wartensleben after the old manor in Meseberg had burnt down in March 1721. Ten years after his death the estate and some other properties were purchased by Prince Heinrich of Prussia, who resided in Rheinsberg at the time. One year later Heinrich gave the property to his minion Christian Ludwig von Kaphengst (1740- 1800) as a present. Among the later proprietors were Carl Robert Lessing, editor of the "Vossische Zeitung". As a matter of fact, the Lessing family served Theodor Fontane as inspiration for his novel "Effi Briest".

In 1945 the estate was condemned. The detonation of the castle planned by the Red Army could be prevented by the mayor Franz Rhode. In the following decades the castle gave room to a grocery store, a Kindergarten, the village office and other facilities. After the German Reunification the castle which was not given back to the former owners decayed until the Munich Messerschmidt foundation bought the run-down estate in 1995 without any specific concept and restored it extensively. The foundation let Meseberg castle to the government for the usage of guesthouse for an intial 20 years and a symbolic rent of one euro.

The adjacent buildings have been used as hotel and restaurant since the restoration of the castle. The "Schlosswirt Meseberg" is a family-run hotel and is situated in the former cartwright's workshop and brewery of Meseberg castle on the banks of lake Huwenow. 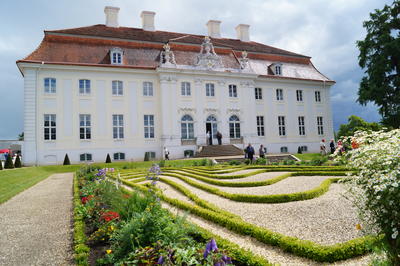 In 1936 the SS errected the concentration camp Sachsenhausen on the outskirts of Oranienburg. 200,000 people from all over Europe were detained there. Ten thousands died during their captivity or became victims of systematic extermination.

In 1993 the memorial and the museum Sachsenhausen were integrated into the newly founded "Stiftung Brandenburgische Gedenkstätten" (Brandenburg memorial foundation). Twelve different permanent exhibitions at authentic places let visitors experience the multifaceted history of the site. They show the many different aspects of the history of the concentration camp, not to forget the use as special camp by the Sovjets and then as memorial by the former GDR. The memorial furthermore offers temporary and special exhibitions on a regular basis as well as a number of special events.

Visitors in the Memorial and Museum Sachsenhausen
© Frank Liebke

The memorial has become a modern and contempary museum with special tasks including the humitarian support of survivors and their relatives and the historic and political education.
The international youth centre / youth hostel Sachsenhausen, "Haus Szczypiorski" has been available for seminars and meetings since 2006.
The building which is situated in vicinity of the memorial offers 33 sleeping places.

Find out more about the Memorial and Museum Sachsenhausen by clicking here.

The Sachsenhausen Memorial Run has played a major role in the sports activities of Oberhavel since the 1960s. The traditional sports event stands for tolerance and open-mindedness at a place of commemoration. The run is organized by the Kreissportbund Oberhavel e.V. (district sport association) in cooperation with Oberhavel county and the town of Oranienburg. It takes place every May 1st and contributes to a European understanding.

The three different distances of 7.5 km, 15 km or five times 1 km (relay) enable everybody to participate in this sporty commemoration. There are particular categories for walkers, nordic walkers and even for the youngest ones.

It has become a wonderful tradition that young athletes from our Polish partner countys Biala Podlaska and Siedlce as well as from the Hessian Vogelsberg county compete with us in the Sachsenhausen Memorial Run. 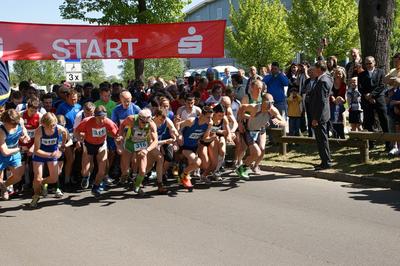 Start at the Sachsenhausen Memorial Run

In 1939 the SS erected the biggest women's concentration camp on German territory in the Prussian village of Ravensbrück near Fürstenberg. In the next three years a men's camp and the so-called "youth-protection camp Uckermark" for young women and girls were added. Approximately 132,000 women and children, 20,000 men and 1,000 female teenagers were registered as camp detainees from 1939 until 1945. Some ten thousands were killed, died of hunger, illnesses or due to medical experiments.

In 1993 the memorial became part of the Brandenburg Memorial Foundation. In the course of reorganisation in the early 1990s the foundation installed two new permanent exhibitions in the former headquarters. In 2006 a new exhibition was added documenting the history of cell construction. One of the former warden's buildings in the former SS residential settlement has been home of an exhibition on female SS personnel of the concentration camp in Ravensbrück since autumn 2004.

The international youth centre/hostel which was installed in the former warden's buildings in 2002, is a place of historic and political education. The youth hostel Ravensbrück offers accommodation for up to 99 guests.

Find out more about the Memorial Ravensbrück by clicking here.