The county logo aims at the geographical location of Oberhavel "directly above" - directly above the federal capital. The picture shows three stylized elements: the orange-coloured circle symbolizes Berlin. The green circle represents Oberhavel, which clings to the capital, but which also stands out from it because of its remarkable advantages. The "blue line" amidst the green represents the river Havel, which the county owes more to than just its name.

The heraldic details: seperated by silver above green; on top the golden-armoured and red-tongued red eagle, the wings overlayed with golden clover stems; at the bottom two red-armoured silver swans flying next to each other. 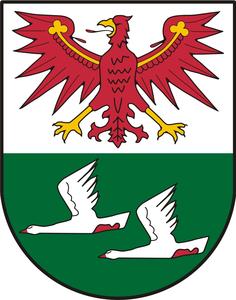